Gretel with calfStark Hollow Farm began raising registered American Milking Devon Cattle on our Vermont farm in 2015. The Milking Devon is a hardy, heritage breed animal who is well suited to the New England climate.

Once a popular multi-purpose breed, today the Milking Devon is listed as "critical" with the Livestock Conservancy and mostly raised by small heritage breed farmers like us with a passion for preserving this gorgeous historically and contemporarily valuable animal.

The Milking Devon is one of few triple purpose breeds of cattle left in the United States. This breed has always met the needs of the small farm, providing its owners with beef, milk, and draft power. While more common breeds of cattle have endured many changes and fads, the Milking Devon has retained most of its original qualities throughout history. Its value lies not only in its history, but in the qualities retained that other breeds have long since lost. The American Minor Breeds Conservancy has done a great deal to help the Milking Devon in recent times, but the breed's importance was identified long ago. (The term "Devon" is often used synonymously with Milking Devon in New England, and with the North Devon in England).

In 1858, William Youatt stated, "The Devon as an aboriginal breed is a very valuable one, that has seemed to have arrived at the highest point of perfection." He went on to point out, "From the earliest records the breed has remained the same, and had been altered in no essential point in the last 30 years."

Contemporary Milking Devon breeders are still not anxious to cross this animal to improve specific characteristics or make it more competitive with modern breeds. The breeders of the Beef Devon did follow this trend, and according to New England ox teamsters, "bred the brains and brawn out of the animals in the process." Even in its native North Devon, England, the original triple purpose Milking Devon can no longer be found.

In comparing many of the early descriptions of the Devon, it is obvious that the same beast exists today in color, form, size, productivity, and character in the Milking Devon. While total number may be critically low, the breed nonetheless continues to survive in its original form.

Watch this short video about the American Milking Devon in Vermont

Video credit: Across the Fence produced by the University of Vermont Extension.
http://www.uvm.edu/extension/atfence

Tamworth Sow in Wooded AreaStark Hollow Farm raises a small herd of pure bred Tamworth pigs. We do not cross our animals with other breeds and instead seek to ensure the continuance of the breed while focusing on animal welfare rather than high production.   Pork Price List

The Tamworth originated in Ireland where they were known as "Irish Grazers", being given that name due to the fact that they were such wonderful foragers. About 1812 Sir Robert Peel, being impressed with the characteristic of these hogs imported some of them to his estate at Tamworth, England. It is from this place they derived their name. An English authority, who calls it the "Mahogany" or "Grizzly" pig, says it was extensively bred in several of the midland counties of England early in the nineteenth century. When the droves were mainly kept in the woods and forests. They are not a composite breed, and are thought by many to be one of the oldest and purest breeds in Britain. Source: Tamworth Swine Association

Currently, the Tamworth breed is listed as "Threatened" in the United States by The Livestock Conservancy and "Vulnerable" in the UK by the Rare Breeds Survival Trust. With its more wild nature, the Tamworth is not suited for commercial production models which involve the inhumane treatment of pigs in small confined spaces, fed enormous amounts of genetically modified corn, and huge amounts of antibiotics and other chemicals. Because the commercial factory farming industry has no use for them, these beautiful animals would become extinct if it weren't for the commitment of small farmers to continue to breed and raise these animals.

Many folks will tell you they raise "heritage breeds", but if the animals they are raising are not true genetic breeds, in other words, pure-bred, then there is little support for the continuance of the breed. The Livestock Conservancy is working to codify the definition of "heritage breed" in each category of livestock. 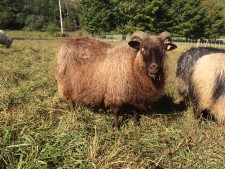 Elderberry is a beautiful dark moorit ewe out of Blueberry and Ursus. Excellent mother, gorgeous fleece. Out of our one of our meatiest lines. Very good milk and great mother. Good all around animal. Friendly. AI genetics include 1/8 Bambi, 1/16 Rektor, 1/16 Kari.

FOR SALE: $700, $1,100 with lamb by her side. Link to lamb: http://www.starkhollowfarm.com/icelandic-sheep/icelandic-lambs-for-sale/230-huckleberry.html

Our farm flock: For breedstock, wool, meat, and dairy.

Stark Hollow Farm sells registered Icelandic sheep from our small homestead farm in Vermont. All our animals for sale may be registered upon purchase. Animals are trained to electric fencing, including electric netting. Once the largest Icelandic sheep breeder in New England, our flock was also certified Animal Welfare Approved by AGW and certified 100% grass fed For many years. When we scaled our farm back, the certification no longer made economic sense but we still follow most of those practices. We do not use grains for finishing. Our pastures are chemical, fertilizer and pesticide free as is the organic hay our animals consume during winter months. We do treat for parasites as needed and augment our parasite management program with the use of natural products such as organic garlic concentrate, organic north Atlantic kelp and other natural minerals.

Our heritage breed Icelandic sheep are rotationally grazed on pasture in the warm growing seasons and over-wintered outdoors with local organic grass hay & natural legumes. We believe the fresh air, the sun, the outdoor activity and exercise contribute to our sheep being healthier and stronger. All this results in very happy critters and eventually translates into more and better wool, leaner and tastier meat, and flavorful dairy products.

Sale price includes registration papers, vaccinations appropriate to the age the animal leaves the farm, ear tags, ear tattoo, hoof trim and parasite treatment upon request or as needed prior to leaving the farm, as well as technical support as needed.

Please note, however, pricing does not include vet certificate. If you require a certificate, we will arrange for it at cost. Delivery is also available for an additional fee. Please contact us for more information.

"The Icelandic sheep is one of the world's oldest and purest breeds of sheep. Throughout its 1100 years of history, the Icelandic breed has been truly triple-purpose, treasured for its meat, fiber and milk."
~ Icelandic Sheep Breeders of North America